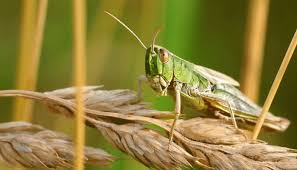 Locusts attack destroys the crops beyond expectation. The East African countries Kenya, Ethiopia, and Uganda are badly affected by the Locusts Attack. Locusts attack vegetarian crops like cereal crops, legumes, and pastures. It causes a huge economic loss for the country. It can also result in the famines of crops. It was estimated by the World Bank that the loss caused by locusts’ attack can be reached up to US$8.5 Billion. They fly in giant groups and cover large areas of crops. They breed at different locations and attack at a different place. Many countries are fighting to control the locust attack as the second wave of the attack is approaching. The breed in warm places with moisture and salt. The eggs are about 4cm to 6cm deep in the boil laid by the female locusts. Many efforts are made by officials and local farmers to control the attack of locusts. Once they attacked it is almost impossible to control them. The only area where they can be controlled is the breeding sites where they get ready and attack. The biopesticides are the somehow solution to get rid of the eggs buried inside the soil. Female locusts find the underground soil save therefore buried the eggs there. Climate and soil are the main factors in increasing the breed of locusts. Within a square kilometer, the breeding site consists of 40 to 80 million locusts. The risk can be minimized only with strict underground surveillance after identifying the areas where female locusts laid the eggs. This is the most effective area to control the risk and it is also cost-friendly.

Risky Areas for the Locusts Attack

As East-African countries are at higher risk, the breeding region within the desert area of Kenya, Uganda, and South Sudan are identified. The risk for Kenya is higher because the climate there is most favorable for the locusts. There is a vast area that is ideal for their breeding. As compared to Kenya, fewer places are there in Uganda as a breeding environment. These are restricted to the north eastern region.

Possible Actions for the Control

After reading about the high breeding rate of locusts and very limited options to control, wise actions are needed to be on the saver side. Financial efforts and men’s power both are required to take a proper action plan. Several suggestions that I read from different resources might help me take effective action on it.

Change in climate triggers the locusts’ attack and gives them favorable conditions but working on the area with planning can save the crops from devastation.